July 12, 2018
Earlier this year, Archeophone Records released what may be the earliest known banjo recordings in existence. The archival specialty music label restored four songs by minstrel-era musician Charles A. Asbury, who was originally recorded in the 1890s on wax cylinders. The result is a 45-rpm, 7-inch vinyl record, titled 4 Banjo Songs, 1891-1897. 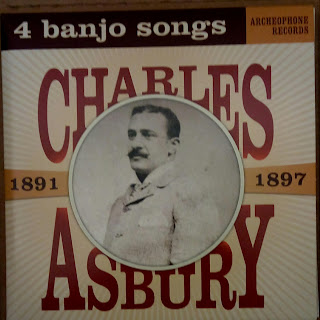 The songs presented are "Haul the Woodpile Down," "Never Done Anything Since," "New Coon in Town" and "Keep in de Middle ob de Road." Judging by those last two track titles, it may already be apparent that there are some racially offensive lyrics on this album. These were typical of blackface minstrelsy, which began in about the 1830s and rose to international fame. 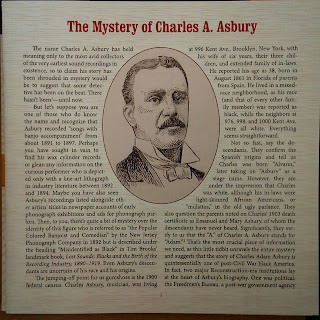 Asbury is an interesting case, as his race is somewhat disputed. The Archeophone release highlights this mystery in the 16-page color booklet included with the album. The packaging is especially handsome, worthy of the historical significance of these songs. In addition to the booklet, the album is presented in a gatefold cover with liner notes by and an inner sleeve with lyrics.

Two traits of this album make it especially significant. First is the fact that the songs were recorded on wax cylinders. The delicate nature of this media made them prone to damage, so it's remarkable that these have survived. Wax cylinder recordings were not mass produced, but rather made in small batches with the musician having to record the same number over and over again, which sounds like something hipsters would do today. Furthermore, wax cylinder players were more often used as coin-operated jukeboxes and not in-home use. 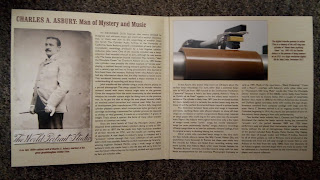 Secondly, Asbury played stroke-style, and contemporary banjo luminaries like Dan Gellert have called these songs the "missing link" between stroke-style and clawhammer banjo playing. "Haul the Woodpile Down" survives today in the old-time repertoire.

In fact, Gellert helped bring that very recording to prominence when he discovered it in 2010 while perusing the online Cylinder Audio Archive at the University of California at Santa Barbara. The Washington Post has a great writeup about the find and its significance. The cylinder was in the collection of John Levin, who developed a playback machine (called the CPS1) to digitize the recordings. The results are impressive, as the recordings sound clear and full. 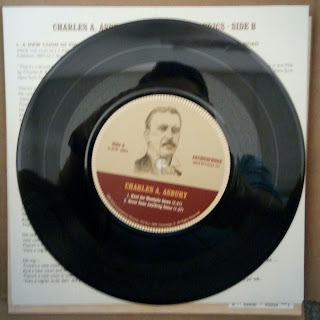 Archeophone has produced a limited run of 1,000 copies of the Asbury album. It's unclear whether demand will spur them to make more. The price ($16.99, plus shipping) may seem a bit high for such a brief record, but the packaging is exquisite and robust. The vinyl has a good weight and is well-pressed. The only flaws you'll hear are the originally pops from the wax cylinder.

If you are a devoted fan of the banjo and its historical significance, you can't pass this up. Visit archeophone.com to purchase.

Popular posts from this blog

Clawhammer Picks and You: A Review

January 17, 2018
Clawhammer picks are a useful tool for increasing volume or to overcome fingernail challenges, such as broken, too short or weak nails. There are all sorts of commercial and homemade solutions available for banjo players, but it can be difficult to decide which options to choose. Thankfully, I've already done some of the work for you.
Just to be clear, I prefer my natural fingernail for frailing. However, there was a time when I experimented with regularly using a pick, and there are instances now where I find that a pick is necessary. Today, I'll take you through the five options I've tried. These are all available online at prices ranging from about $1 to $13.

Reversed/Reshaped Dunlop Pick ($0.75)
This was the most common suggestion before other companies started addressing the gap in the clawhammer pick market. Take a bluegrass pick, flatten it out and wear it backwards. The problem is that it's hard to get the fit right. While Dunlop picks are cheap and readily avai…
5 comments
Click to continue »

March 19, 2020
Over the last eight years, Pisgah Banjo Co. has become one of the top builders of openback banjos in the United States. Founder Patrick Sawyer (formerly Heavner1) started the company in 2012 with the goal of providing affordable, quality banjos with the old-time community in mind.

The company’s stated mission on its website is “to create affordable, professional quality, handcrafted banjos using 100 percent native Appalachian hardwoods.” Aside from more common woods like maple, walnut and cherry, Pisgah also uses persimmon in its instruments. You won’t find ebony on the company’s fingerboards and headstock overlays. Instead persimmon and Richlite are used. Richlite is an eco-friendly paper-based composite material that has the look of ebony or rosewood and is far more sustainable.

Sustainability is at the heart of Sawyer’s business plan. In addition to using local materials, the Pisgah Banjo workshop is entirely solar-powered. Sawyer studied renewable energy in college, and even wor…
1 comment
Click to continue »

Getting Blitzed with Tom Collins

March 02, 2018
A little more than a year ago, Salem, Massachusetts-based banjo player and teacher Tom Collins embarked on a yearlong project he called Banjo Blitz. The weekly YouTube series provided short banjo lessons on technique. Each video is about five minutes long, give or take, and presents a short pattern — or “ostinato” — designed to teach and improve a specific aspect of banjo playing.

The mission was to get the audience “to practice clawhammer in discrete chunks every day without the burden of trying to memorize tunes,” Collins says. He wanted to build skills rather than repertoire.

“Let’s take the tune off the table,” says Collins, who has been teaching banjo for 11 years. “Let’s focus on a simple, mantra-like ostinato that can train your body how to execute a technique properly, while training your ears how to hear it properly. Let’s also make it so that you can do this every day without it sucking every spare minute from your life. The big dirty secret about learning how to play an ins…
4 comments
Click to continue »

B. Kramer
A proud father and adult beverage enthusiast and his quest to learn to play old-time music.

When you want genuine music -- music that will come right home to you like a bad quarter, suffuse your system like strychnine whisky, go right through you like Brandreth's pills, ramify your whole constitution like the measles, and break out on your hide like the pin-feather pimples on a picked goose, -- when you want all this, just smash your piano, and invoke the glory-beaming banjo!
--Mark Twain, "Enthusiastic Eloquence," San Francisco Dramatic Chronicle, June 23, 1865

Jump on the Banjo Wagon